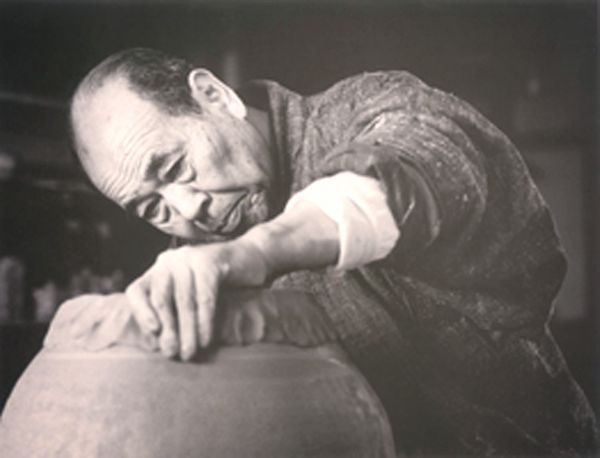 Tatsuzō Shimaoka (born 1919, Tokyo, Japan and died 2007Mashiko, Japan) lived and worked in Mashiko, Japan, a town renowned for its pottery traditions. Originally, Shimaoka studied pottery at the Tokyo Institute of Technology and then apprenticed under Shoji Hamada (1894-1978) before establishing his own kiln and complex in Mashiko in 1953. From 1950 to 1953, Shimaoka worked at Tochigi Prefecture Ceramic Research Center where he developed many of his signature rope inlay decoration techniques. From the 1960s to the 80s, Shimaoka traveled around the world and was invited to exhibit in North America, Asia, and Europe. In Japan, he was given many awards for his distinguished work and contribution to traditional Japanese folk art. The technique of jomon zogan (rope-impressed inlay) earned him the honor of Japanese Living National Treasure in 1996.

The Work of Shimaoka

Mimi y Roberto visited the studio of Shimaoka in 2000. They enjoyed immensely meeting the master potter in person and watching as his assistants loaded the climbing hillside kiln for their twice-yearly firing.